As the official mascot for the World Exposition in Hannover, Germany in 2000 (Expo 2000), Twipsy was featured in many merchandise products, as common as pins, apparel and plush toys, through to special edition products.

Some merchandise can be purchased at the EXPOSEEUM, as well as in second-hand venues. The following images correspond to photographic samples of merchandise as of present. Due to age, the products are discontinued, however qualify as special collectibles.

Twipsy in another global outfit - not known

The plush toy also came in blue, orange and yellow 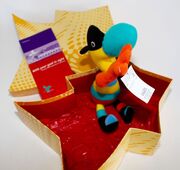 A Global Outfit Twipsy, wearing the “Four Performers of Bremen” insignia on the jacket

Baseball cap with Twipsy's distinctive eyes, one on each side.

Same hat from behind 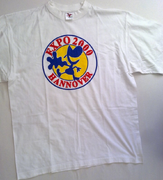 Navy blue shorts with an illustration of Twipsy in the pocket, and a white line containing expressions.

Keychain with three multicoloured Twipsy on the end 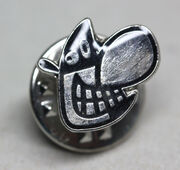 A small pin featuring the small Happy Twipsy expression. It is common for a pack of six small pins to be sold.

Set of six pins commonly with a theme. This example focuses on sporting activities. 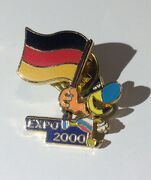 A series of holographic stickers featuring the mascot 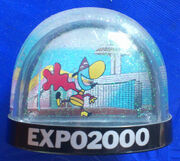 Black harmonica with a gold “Expo 2000” and Twipsy’s likeness
Community content is available under CC-BY-SA unless otherwise noted.
Advertisement