There exists a corporate design manual for the Expo 2000 branding. The manual, published in the year 1996, primarily focuses on the primary emblem of the Expo 2000, the Impuls logo, as well as the ideal typeface for the brand, as well as numerous design examples (on vehicles, signage and stationery).

Earlier publications have “in progress” chapters under Orientation and Fashion, which would likely be placed in the manual when the chapters have been published.

There is a small chapter relating to Twipsy, who is simply known as the “Mascot”. There is a page of illustrations of the mascot, in which the mascot explains its story, followed by another page of design guidelines of how not to present the mascot. The final page explains the mascot’s potential role in advertising and merchandising situations.

Keep in mind that the mascot may have undergone design changes between the 1996 and the 1998 design iterations (to be covered in the 1998 design manual after being named Twipsy.)

There exists a companion design manual for the mascot Twipsy (now named since its publication around 1997). Chapter listings include design guidelines for the character, name mark, as well as models, placement in stationery and Expo signage, as well as animation references (prepared for a Expo advertising and the cartoon series).

Sizing guidelines of Twipsy and logotype

Bicolour layouts of Twipsy and logotype 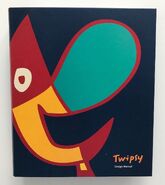 Cover of the design manual folder

Design sizing and statistics of the Twipsy character for advertising

Statistics for the patchwork Twipsy mode

There also exists a style guide manual corresponding to the animated series. Brief character biographies and information are presented in the guide.